I was lucky enough to interview Emily Rose, Haven’s Audrey Parker, while she was in New York for New York Comic Con two weeks ago. For those who don’t know, Haven surrounds the mysterious “troubles” of fictional small town Haven, Maine. During season one, FBI agent Audrey Parker tracks a criminal to Haven, only to stay upon discovering her hidden links to its mysterious history. Throughout season two, the audience (and Audrey) discover the “troubles” are far greater than previously expected.
For fifteen minutes, after her NYCC panels, autograph sessions, and press room discussion, we chatted about Haven’s second season, its Christmas episode and what might happen next year.
Keep reading at CliqueClack
Publicado por ElleTolentino en 2:09 PM No comments:

Good morning to all!
I hope you have been voting every day to get Haven nominated for a People's Choice Awards in the category of Favorite Sci-Fi/Fantasy TV Show.
Remember that the last day to vote is tomorrow October 28th, so keep voting!
Publicado por ElleTolentino en 9:45 AM No comments:

STARS from sci-fi series Haven and Warehouse 13 will be appearing at this month's MCM Expo London Comic Con, show organisers have announced.
Lucas Bryant and Aaron Ashmore will be joining actors from shows such as Eureka, Torchwood, Doctor Who, Teen Wolf and Sanctuary as special guests at the October 28-30 festival of pop culture.
Source: Coventry Telegraph
Publicado por ElleTolentino en 10:13 AM No comments:

Trailer and Interviews: Bag of Bones

Email ThisBlogThis!Share to TwitterShare to FacebookShare to Pinterest
Etiquetas: Bag of Bones, preview

Every once in a blue moon, the stars align and something miraculous happens.  In this case, HAVEN’s third season was announced simultaneously with its appearance at New York Comic-Con.  It was perfect timing as it allowed fans to celebrate face-to-face with the cast and creators of HAVEN.  So as NYCC embraced and showcased the supernatural sci-fi series for the first time, fans from around the globe raced to join in the festivities.
As limos arrived, fans streaked through the hallways, and security smiled as both the talent and fans strained to get a glimpse of each other, the air was filled with anticipation.  This was not just a day to celebrate; it was a day to revel in the mutual love-fest from both sides of the entertainment spectrum.  It is a curious symbiotic relationship, for entertainment needs both talent and an appreciative audience.  The most gifted writer or performer in the world is but a voice echoing in a forest without someone to watch and listen.  So when such an occasion arises, it is a joyous thing to be a part of — and the HAVEN panel and autograph signing at NYCC was one such beautiful moment in time.
Keep reading at The TV Addict
Publicado por ElleTolentino en 8:05 AM No comments:

EDIT: Haven does not appear on the list, but don't worry. Click on other and type the name of the show, then vote! 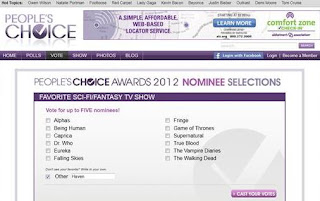 Sam Ernst: On the Set of Haven Finale 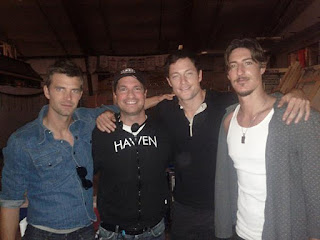 Sam Ernst: On the set of #Haven finale. Easiest "Guess the writer" game EVER.
Publicado por ElleTolentino en 8:05 AM No comments:

Thanks to Janeen for the links!
Publicado por ElleTolentino en 8:04 PM No comments:

Hints, Clues, and Suggestions for Season 3!

Haven was a late addition to the New York Comic Con schedule--but following the announcement that the show had been renewed for a third season, it's right at home. I was thrilled to see so many dedicated Haven citizens turn out for the Haven panel, which featured cast members Emily Rose, Lucas Bryant, and Eric Balfour alongside writers Jim Dunn, Sam Ernst, and Charles Ardai. The writers were candid and conversational; the cast members--especially Lucas and Eric--were goofy and hysterical. All in all, a good time. But at NYCC, I'm most like Audrey: When I have a job to complete, I'm all about the facts. That's why I've combed through all the bro-snuggles, in-jokes, and brilliant anecdotes to find you any and all Haven season 3 info. Here are the hints, clues, and suggestions for the upcoming season!
Keep reading at Ology
Publicado por ElleTolentino en 9:40 PM No comments:

After months of speculation and about a million desperate tweets…Syfy and Showcase, just this morning made it official - the supernatural series HAVEN has been given a 13-episode order for the third season, to premiere in 2012.
“The superb cast, led by Emily Rose, Eric Balfour and Lucas Bryant, along with the terrific production team, delivered a successful season in both critical acclaim and rising viewership," said Mark Stern, president of original content at Syfy and co-head of original content at UCP.
Keep reading at Sea and Be Scene
Publicado por ElleTolentino en 4:39 PM No comments:

EmilyroseLA
Celebrating season 3 with the hubs and frozen yogurt.

EmilyroseLA
And we're back :)
HavenJim
Thanks to all you fans out there for earning #Haven a Season 3! See you at NYC Comic Con Friday. #HavenNews

syfy
Syfy: As always, I'd like to thank the fans for their support! Your watching #Haven is what lets us keep making the show, so THANKS!

ERICBALFOUR
Thank you to all our #Haven fans and family for helping us get a SEASON 3!!!


NoraZuckerman
Thanks to everybody re. #Haven season 3! It's great news - we have many more stories to tell. Thank you all for watching!
Publicado por ElleTolentino en 9:56 PM 2 comments: 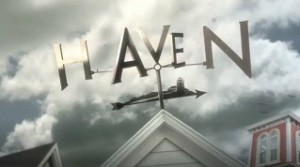 Syfy has given the green light to a third season of its supernatural drama Haven.
A Syfy rep confirms to TVLine that the net has ordered 13 new episodes of the series, which is based on the Stephen King novella The Colorado Kid.
Haven averaged a decent 2.5 million viewers during its sophomore season.
The news was first reported by Variety.
Source: TV Line Haven is definitely one of SyFy’s blockbuster original series. Although season one gave us a lackluster first half, the writing, acting, and special-effects all improved by season one’s finale. Last year, Carissa and I reviewed the finale and interviewed producer Charles Ardai.
This season, they upped the star power, the budget, the writing, and the action by ten. I really enjoyed Jason Priestly as Audrey’s charmingly troubled boyfriend; former WWE wrestler Adam “Edge” Copeland as the town’s troubled trouble-fixer; and Tahmoh “Helo” Penikett as Duke Crocker’s troubled hating father.
All of the actors kicked it major league. Lucas Bryant portrays Nathan’s vulnerable toughness with his normal, acting excellence. Emily Rose‘s Audrey developed from last season’s scrappy action hero. Season two’s Audrey grows increasingly distant while uncovering her buried secrets. Eric Balfour plays the gangly shyster, Duke Crocker, with 150% believability; he carries his frame as bar-fight ready. THIS season’s Duke I totally believe had a difficult childhood and NEEDS the multiple hidden firearms. I thank the producers for ceasing to use Balfour as eye candy.
Keep reading at CliqueClack
Publicado por ElleTolentino en 10:31 AM No comments:


Entertainment One (eOne) is proud to announce the cast of the Syfy hit series Haven will participate in the New York Comic-Con panel on Friday October 14th at 1:45pm in the IGN Theater.  In attendance will be Emily Rose, Lucas Bryant and Eric Balfour.

The hit summer series, based on the novella “The Colorado Kid” from renowned author Stephen King, follows former FBI agent Audrey Parker (Rose), who becomes a cop in the small town of Haven, Maine, and soon discovers the town’s many secrets, which also holds the key to unlocking the mysteries of her lost past.
Source: Convention Scene
Publicado por ElleTolentino en 10:10 AM No comments:

Season 2 is back in the UK!
Tonight at 9 pm on Syfy UK.
Don't forget to watch.
Publicado por ElleTolentino en 3:36 PM No comments: 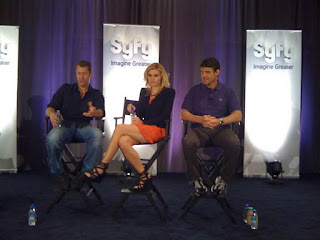 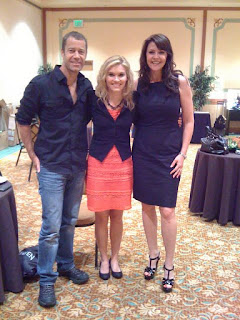 Christmas Episode to Air on December 6

The announcement was made during the annual Syfy Digital Press Tour, taking place once again in Orlando, Fla. Earlier in the day, the channel announced it would be premiering all three of its Christmas specials on the same night. Holiday outings of "Eureka," "Haven" and "Warehouse 13" will air Dec. 6 beginning at 8 p.m. ET on Syfy.
"Haven" will do its first-ever holiday episode, where everyone in the New England town thinks it's Christmas, even though it's July. No one seems to notice that it's the wrong time of year except for Emily Rose's character of Audrey Parker. She has to work to try and set things right, especially when people start disappearing into thin air.
All three episodes will take place outside of the shows' continuity, meaning you will see things that you probably wouldn't be expecting after the shows' respective finales this year.
Source: Airlock Alpha
Publicado por ElleTolentino en 12:51 PM 1 comment: 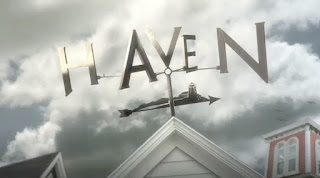 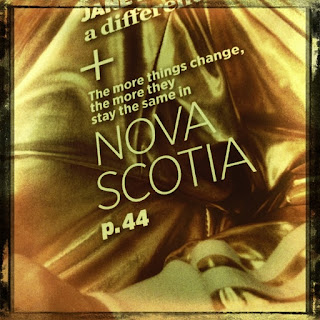 Emily Rose: I flew over nova scotia (waved 2 my peeps) now Miami and this is on the magazine. Hoping 4 #haven3 @Syfy
Publicado por ElleTolentino en 9:36 PM No comments:

Syfy, Why Is It Taking You So Long?

It's October 7th and we haven't heard about a Season 3 Renewal.
I am very confident that the show will be renewed because of the great ratings it had but the wait is killing me.
So, I invite all of you Twitter members to drop a tweet at @Syfy and remind them how much you like this show (now that is Friday night) and how much you want it renewed.
Go now!
Publicado por ElleTolentino en 4:55 PM No comments:

Good morning Aussie fans!
Haven's Season 2 premieres tonight. Episode 1 "A Tale of Two Audreys" will air at 20:30 hours followed by episode 2 "Fear and Loathing", on 13th Street Universal.
It is a wonderful season, so don't forget to watch. 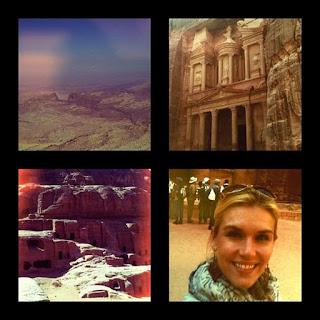 Ratings: Sins of the Fathers

Last Friday, Haven was steady vs. last week to a 0.5 in the adults 18-49 rating, and it was almost steady in viewers as well.
18-49 adults: 0.5
Viewers: 1.803 million.
I liked the ratings, steady despite competing with the playoffs and the fall shows.
It was an amazing season, wasn't it?
Source: TV by the Numbers
Publicado por ElleTolentino en 2:58 PM No comments:

Good morning Canada!
Another season is over. Tonight season finale, episode 12 "Sins of the Fathers" airs on Showcase.
It was an amazing season and thank you for all the support.
We're staying around, because the Christmas episode will be here before we know it and because I'm very sure the show will be renewed.
Don't forget to watch!
Publicado por ElleTolentino en 8:00 AM No comments:

Reviews: Sins of the Fathers

It's that time again, Haven fans: Tonight's episode, "Sins of the Fathers," closes out a truly spectacular second season. In its sophomore outing, Syfy's sleeper hit original series proved its mettle with an uncompromising, evocative, and emotional storyline. Haven season 2 managed its supernatural elements much more elegantly than its predecessor; taken as a complete arc, these twelve episodes show off an incredible amount of character development. As a member of the Haven faithful, I may be among the few, but I know I am among the proud. This is not a show to be missed, and tonight's finale proved we still have more mysteries to solve together in Maine's weirdest little town.
Keep reading at Ology.com


"If she's in love with you, she's gonna want to take risks for you. And we can't have that" ...Garland Wuornos

Looking back over this season of Haven, I can hardly find fault at all. Most of the problems of the first season have been nicely put to rest, and there's an overall feeling of quality running through most of the show's second run.

So what about the season finale?
Keep reading at A Media Mindset
Publicado por ElleTolentino en 10:10 AM No comments: