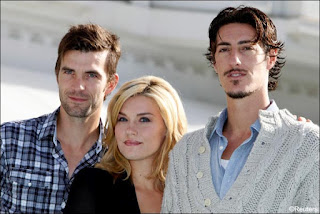 Let’s face it – Unexplained phenomena happens. And it needs to be dealt with, rather than ignored or dismissed as we tend to do most times. Haven is a show that has been described as ‘off the wall’ by keen Indian viewers. Because it deals with the occurrence and tackling of just such phenomena, by former FBI Special Agent Audrey Parker (Emily Rose), who arrives in small town Haven, in Maine, USA, on a routine round before finding herself inexplicably drawn to the place and its ‘troubles’ – supernatural occurrences that mysteriously beset residents here.

Using her own heightened empathy, she and local Police partner Nathan Wuornos (Lucas Bryant) attempt to help those who need them most – a man who shadow kills people, a lady who sends off electric charges that makes human hair stand on end with static, everyday machines that acquire a life force all their own… In this supernatural drama series (loosely based, apparently, on Stephen King’s The Colorado Kid) Parker finds her choices leading her to clues in her own personal quest – information on a mother she hadn’t known. Nothing is coincidence as they say, and in inclusive India, no stranger to occurrences ofinexplicable happenings, this show is finding particular resonance. Eminently watchable, and a family bonder, too, given that shared thrill of creepiness whilst watching – only perhaps not for the very young/children, as with most shows in the horror/supernatural genre.

Haven airs on weekdays at 10pm on Zee Cafe.