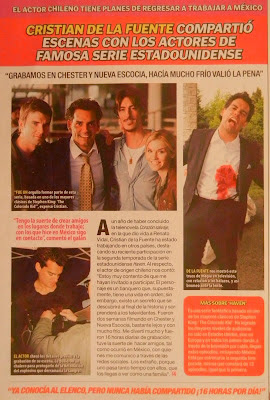 I found this article in a Mexican magazine called "TV y Novelas". As many of you know, Cristian de la Fuente has done some work in Mexico and he shared these pictures with them from the 8th episode of Season 2 "Friend or Faux".

Cristian mentions how cold it was when they were shooting and how proud he was to be part of a series based on a Stephen King's book. Also, he was happy he was a guest star, and that he was there for two weeks, shooting 16 hours a day and how much fun he had with the cast (I don't doubt it). He became friends with them and he misses them, but he keeps in touch by any of the social networks.

The article ends with the great ratings the show has had not only in the United States but in Europe and other countries.