Haven Cast Let Their Hair Down At NYCC 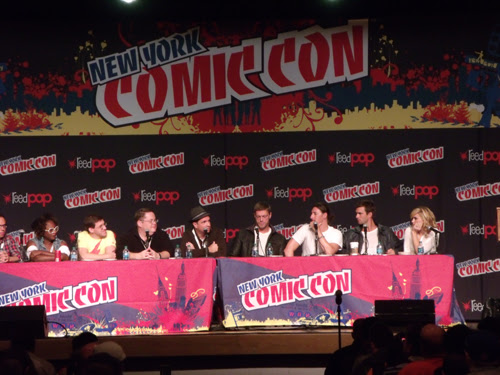 The cast and producers of ‘Haven’ graced the New York Comic Con stage in October. During the panel, I realized why Eric Balfour’s fans love him, why the male cast members love each other and why we love the show.

Basically, everything you’d expect from a young, interactive cast and writing staff happened in the New York Comic Con Haven panel. Everyone just relaxed and let their hair down. Eric Balfour (Duke) and Lucas Bryant (Nathan) fist-bumped each other. Cast and crew all pretended they didn’t want Stephen King (whose novel started it all) on the show. Of course they do! Charles Ardai is still working his magic. The producers joked that Nathan is better looking than Lucas while Lucas casually lounged against Emily’s chair.

I always like panels and in-person interviews because you get a chance to see how actors tick. No matter how press-prepared they are, their feelings towards certain events always leak through. Emily literally glowed while describing her love of the Sarah character. Eric Balfour might be pretty, but, he isn’t a pretty boy. Mentally, he fires on all cylinders. He complimented Adam (aka the Edge) as proving a better actor than wrestler. And he meant it. Basically, if you think Edge is a kickass wrester, wait until you see him act. Speaking of Eric Balfour, why is our favorite long-haired hippie growing his hair out? To play the original long-haired hippie, Jesus, in a zombie flick.